I was hoping for TEBOW SMASH, all I got was TEBOW CRY

Also, check this out:

**UPDATE: This bit of awesome is via Tomahawk Nation

Reasons for slight optimism in the Iron Bowl

I'll be honest, I hate the Iron Bowl. Yes, it's the greatest rivalry in college football, bar none. Yes, beating those inbreds from T-Town for six straight years was incredibly awesome (Never losing to your most hated rival in four years at Auburn? Priceless). Yes, Iron Bowl week brings out the best from the Auburn blogosphere. I realize all these things. I hate the Iron Bowl because so much rides on the damn game.

When Auburn loses, there is an enormous pit in my stomach that is the realization that we'll have to put up with 365 days of Bammer trash talk ("trash" is modifying talk, not Bammer. That would be redundant.) and hope we can end it the next season. When Auburn wins, I feel excitement, but I also feel relief. Jerry at WBE has already expressed this sentiment much better than I could ever hope to here, but I differ from him in one respect: I'm still not "psyched" (his term, not mine) about this year's game. Starting around Thanksgiving dinner through about Black Friday dinner, I will undoubtedly be a nervous wreck. Even knowing that I'm expecting Auburn to get trounced (not as bad as last year, mind you) I still feel sick at the thought of losing to UA-Tuscaloosa. I felt sick after last year, and that was the best Alabama team in 15 years playing the worst Auburn team in 10 years. I guess it just comes with the territory of spending 13 years in public schools in the state.

As far as the game is concerned, if you read the title of this, you may think I believe Auburn has a fighting chance in the game. I've put this on facebook and Track 'em, but this video from one of my favorite movies sums it up quite nicely:

SO YOU'RE TELLING ME THERE'S A CHANCE!

Anyways, there is a chance. There's always a chance. Ask Michigan about whether Appalachian State had a chance against them in '07. So what are some reasons to be slightly (1 in a million) optimistic heading into Friday?

1. This is Alabama's first real road test: The stadia that Bama has visited include Commonwealth Stadium (capacity 67,606), Vaught-Hemingway Stadium (capacity 60,580), and Davis Wade Stadium (capacity 55,082). I'm not counting their season-opening trip to the Georgia Dome to face Virginia Tech, as tickets were distributed evenly between the two teams. Trips to Kentucky, Ole Miss, and Mississippi State don't strike fear into the hearts of opposing teams. However, a trip to Jordan-Hare Stadium (capacity 87,451) does intimidate most opponents. Not only is this the team's first real big road game, but more importantly this is also going to be the largest crowd of opposing fans Greg McElroy has ever played in front of. If Auburn wants to come out on top on Friday, the noise will have to affect his (and his teammates') play.

2. Auburn has performed better against power backs in 2009: There is no doubt Alabama will try to run Mark Ingram for a career day in this year's Iron Bowl. He's on the short list of Heisman favorites and has recently been featured on the cover of Sports Illustrated: 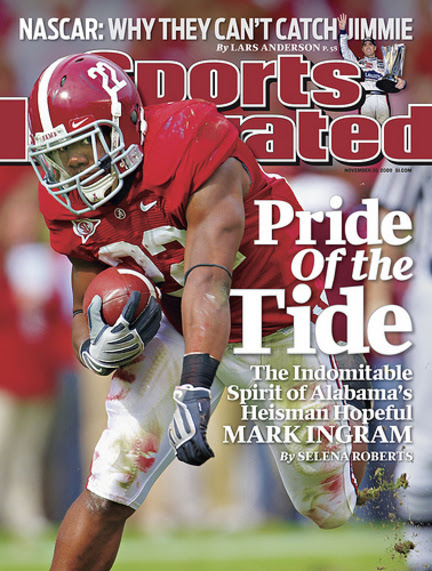 Defensively, Auburn needs to key in on Ingram and hold him in check if we want to have any chance in this game. Fortunately, Auburn's two previous run-ins with "power backs" were being one of three teams this season to keep Mississippi State's Anthony Dixon under 100 yards and bottling up LSU's Charles Scott to 20 yards on 10 carries. UAT would most likely have more success running the football by featuring Trent Richardson more, but given the aforementioned Heisman talk, the Tiger defense can expect a steady diet of Ingram, Ingram, Ingram.

3. Auburn has nothing to lose, Alabama has everything to lose: So those were the only two tangible reasons for optimism for Auburn going into the game, and though I already said I don't share Jerry's view of the game, I felt like I needed to have a third reason for optimism. Auburn has wrapped up a bowl bid, and is most likely headed to the Outback, Chick-fil-A, or Music City. A win over Alabama may vault us to the Cotton, but is that really that much of an improvement? Traditionally, yes it is, but that gain is a small one compared to what the Tide would lose if they were to drop this game: namely, a shot at their 13th* national title. Given this, Alabama should come into this game a little tight, and Auburn should come into this game very loose. The fact that the game is in Auburn should help this as well.

Sorry for the lack of content this week. Been a busy one. Here's the poll and picks:

Sometimes I hate being right

Over at Dawg Sports, I offered this bit of "analysis" before the game, which I have repeated to many people (though usually not in written form):

It seems like recently every Georgia team has had some major flaw that gets corrected just in time for the Auburn game; in 2006 it was Stafford’s inexperience and in 2007 and 2008 it was a defense that loved to give up points. That trend being noted, I fully expect Auburn to lose the turnover battle by 3 on Saturday night. If we can keep from giving the ball away, I like our chances (even with a suspect defense). If Cox and Co. protect the ball and Martinez’ defense takes the ball away from our offense a few times, it may mean a presidential term’s worth of consecutive victories for the Red and Black.

And once again Willie Martinez finds his magic just in time for the Auburn game (albeit a quarter late this time). If we played Georgia in September instead of mid-November, I'm positive we wouldn't be oh-for-our-last-four against the Bulldogs. Possible wins include: 2006, 2007 and 2009. Not saying we'd have won three of those four, maybe only one, but in '06 and '07 Georgia started slow and finished strong, and in '09 Auburn started strong and finished poorly. It's not out of the question to say that Auburn playing Georgia when, say, South Carolina always plays them would have an effect on the outcome of the games.

Bitterness aside, Auburn currently is on a very bad trend. Look at our current streaks against all other SEC teams (in alphabetical order):

We currently own losing streaks against six of the other eleven SEC teams, and in two weeks (barring the upset of the year) will have losing streaks of at least two games to our three main rivals: Alabama, Georgia, and LSU. I'm getting tired of not beating our rivals.

Oh well, 7 wins this season is beyond my expectations. The future looks bright in Auburn. Hopefully Tyrik Rollison turns out to be the real deal. War Eagle, and beat Bama!
Posted by J.D. at 10:42 AM No comments:

Well, I was going to write up a brief Auburn-Georgia history of all of the coaches of one team that played or coached at the other, but it appears several other websites have beat me to that punch. I also had an extended telephone conversation back home and began cleaning and doing laundry for my 348 visitors this weekend. Anyways, here's some predictions:

1996 was Jim Donnan's first season in Athens, and the Bulldogs limped into the Auburn game with a 3-5 (2-4) record. He was still dealing with the mess that Ray Goff left behind, but would improve the program to at least decent status over the next few years. Auburn, meanwhile, was beginning to feel the slide in the Terry Bowden regime that came with lackluster recruiting, but they came into the game at 7-2 (4-2) and fighting for the team's first SEC Western Division title. The '96 game was similar to the '99 game in that it marked the up-and-coming coach with the worse team (record-wise) picking off the older coach whose program was on the downside. Unfortunately for Auburn fans, it was the Tigers on the short end of the stick.

This was a memorable game in the series for two main reasons. First, one of the most iconic pictures in college football history was taken at this game when Georgia's mascot, Uga V, lunged at Auburn wide receiver Robert Baker after he reeled in a touchdown pass. If you've never seen this picture, you've probably never watched Auburn or Georgia or college football period:

You know what would be even better? If we had a live tiger on the sidelines and it lunged at A.J. Green after a touchdown on Saturday! (I'd rather Green not score, but this would be some consolation) Baker's touchdown helped Auburn to a 28-7 halftime lead, and they seemingly had the game in hand. Of course, followers of this rivalry know that Georgia would come back in the second half to tie the game at 28 on the last play of regulation (marking the second consecutive trip the Bulldogs made to Auburn that ended tied after regulation), and thus the second thing that made this game so memorable occurred: Auburn and Georgia were involved in the SEC's first overtime game. Not only that, but at four overtimes it was the longest college football game in history until an Ole Miss-Arkansas tilt a few years later. This game also single-handedly caused the NCAA to change its overtime procedure to force teams to go for two after touchdowns starting in the third overtime. It truly was a historical game!

I still remember watching the game in a Knoxville hotel room (remember, this was during the time in my life when I went to many UT games and mostly rooted for the Vols) with two of my Auburn friends from school. When Dameyune Craig was stopped short on a 4th down in the 4th overtime, my friend Brian ran out of the room, screaming "Oh God, we're going to the weed eater bowl!" I'll never forget that moment, even if I didn't have a dog (pun intended) in the fight. Hopefully Saturday night's game turns out a little bit better for the Auburn faithful.

Not sure what I'll write about tomorrow, but check back and check it out! WAR EAGLE.
Posted by J.D. at 8:25 PM No comments:

J.D.
Graduate student. All around baller.